Our last day in Chobe as we are off to the Okavango Delta today! As ever, we were up in time for our early morning game drive in the NP. On a side note, good to see that my early morning nail filing antics (those damn ragged nails) were a source of amusement (and probably bewilderment) for Chobe safari-goers in a nearby vehicle!!
WOO HOO … a good omen … we were the first vehicle in the park! After entering the park we revelled in a spectacular sunrise. 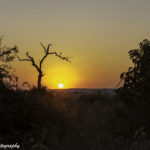 The sun ever so gradually lit up the sky in vibrant oranges and reds. Haskins asked what sighting we most wanted today … we answered “a herd of 300 elephants”!! Not much to ask for!! First sighting was a wake of vultures picking at the remnants of a carcass. 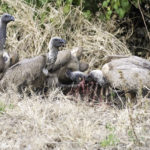 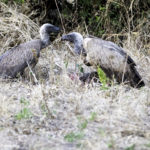 We then followed the track beside the river where we were treated to the glorious sight of a huge herd of Cape Buffalo making their way from the riverbank to the track ahead of us. They were accompanied by a small number of elephants 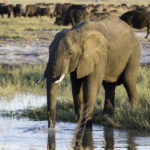 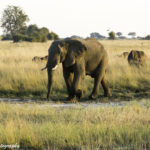 What a glorious sight in the first golden sunlight of the day! We then made our way back up to the main track where Haskins stepped out of the vehicle to more closely inspect the animal tracks. He determined they were fresh lion tracks … and so the hunt was on! Then … as if on cue … we encountered our beauties! 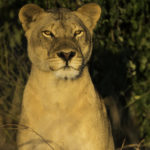 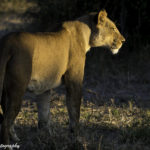 Two lionesses, one at the edge of the road, and the other right in the middle of the road! What an incredible start to the day! Haskins stopped the vehicle, cut the engine, and we just sat there quietly taking in these two beauties. We were so close to them! While we sat there, some of the Cape Buffalo herd we had seen down at the riverbank came up the track behind our vehicle. Well, the lions by this time had made their way alongside the track, and were headed towards the buffalo. And so it was … we sat there watching and waiting …     the buffalo were out in a clearing, while a male lion had made his way behind some bushes quite close to the buffalo. I started recording with the video camera because I felt something was about to happen.  In the next instant the lion appeared from behind the bushes, and was only metres away from one of the buffalo.  It was a staring contest, a real “Mexican standoff”, the likes of which I’ve never seen before!!  After just a few seconds, buffalo “reinforcements” appeared, and the lion quietly retreated. 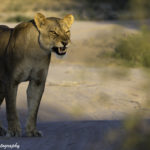 Crisis averted for that buffalo!! And I captured it on video! The thrill of life in the African bush! We continued on following the lions, and actually got ahead of them on the track we were negotiating. It was incredible to hear (and see) baboons going ballistic in the trees, alerting the surrounding wildlife to the approaching lions. The amazing early warning systems of the African bush!! Next stop was morning tea, at the “designated” rest area. 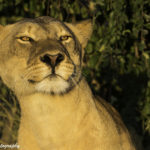 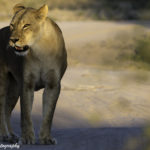 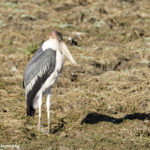 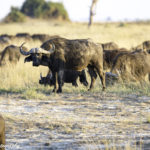 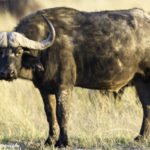 It was there where we presented Haskins with a card and Aussie souvenir to say thank you. He was quite overwhelmed, saying it was the first time in four years he had been “officially” thanked by clients. We then headed back to our lodge where we had breakfast and checked out. And … Heather’s binoculars were located … and returned by Bushtracks Botswana!
We were collected by a driver who transported us the short distance to the Kasane International Airport, ready for our charter flight to the Okavango Delta. The Kasane International Airport, a typical ramshackle regional airport, is undergoing a mega makeover with the unveiling of a new ultra-modern terminal which could be seen adjacent to the current one. It looks wonderful, and will help foster increased tourism in the region. Going through the security check at the airport, the security officer asked to see what was in my backpack. I duly complied, opening my bag. She asked to see the pump spray I had in there. It was heavy-duty insect repellent, and was the only one I had packed, given our tight baggage allowance for the charter aircraft. Turned out it was over 100ml so … in an instant … it was gone! No more insect repellent! Anyway, there was no time to cry over spilt milk as we were ushered towards the tarmac where our aircraft were waiting. Cessna 206s (6-seaters)!! Was pretty apprehensive as I had never flown in a light aircraft before! Captain Mark introduced himself, and Heather, Garv, Norman and I took our seats on board. I got to sit up front with Captain Mark! Di and Steve boarded the second aircraft. And off we set on our 1 hour 10 minute flight. I must say the views of the changing landscapes, from our cruising altitude of 8,000 feet, were fabulous. The grasslands of Kasane made way for the riverine woodlands of Chobe Forest Reserve, then finally the flood plains and marshlands of the Okavango Delta. We even spotted big game from the air – elephants, hippos and buffalo.
Upon touching down on the dirt airstrip beside our lodge, Gunns Camp, we were met by camp staff who escorted us the short distance to our new ‘home’ in the delta where we were even treated to a traditional welcome of song and dance. We were then shown our “rooms”, 6 x rustic style tents, each featuring a bedroom, ensuite bathroom with standalone bath, and an outside private shower. All set on raised platforms overlooking the delta plains, so that we could take in the sights and sounds of the wilderness from our very own abode. Talk about a slice of heaven! The whole camp only accommodates a maximum of 12 guests so the experience is a wonderful private one, set right on the swamp. And no wireless or phone reception!! How glorious … so remote and disconnected from the world! Our camp manager Vicky showed us to the dining room where a light lunch awaited. The dining room and adjacent Buffalo Bar commanded magnificent views overlooking Chief’s Island. After lunch, we had a 2-hour rest period, after which we enjoyed afternoon tea. Then at 3:30pm our guide Mots took us on a motor boat sunset cruise, where we navigated the crystal clear channels of the Boro River. We spotted hippos, elephants, and a myriad of birdlife. 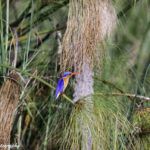 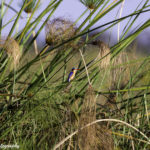 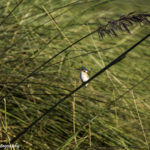 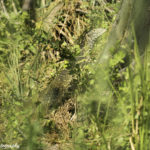 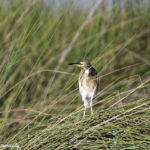 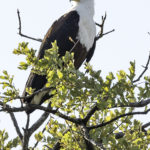 Then we enjoyed sundowners while drifting on a lagoon in the middle of the delta. It doesn’t get much better than this!! 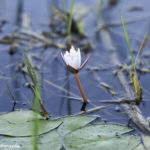 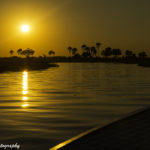 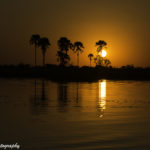 We then motored back to camp where we had showers, ready for dinner. NB: You know you’re far from civilisation when you have to wait to be escorted to the dining room due to the possible presence of wild animals (house rules … after dark you cannot move around the camp without a guide)!
We enjoyed pre-dinner drinks in the Buffalo Bar upstairs, before retiring to the dining room. In total there were twelve of us around the long dining table, the six in our party, plus four other guests (two couples), plus the manager Vicky and guide Mots. The dinner table was beautifully set, and our meal was lovely … butternut pumpkin soup, choice of hake or stuffed chicken, and vegetables. Dessert was a homemade chocolate mousse. All delicious! And to top it all off, we were paid a visit by resident hippo, Tino, who came right up to the railing beside the lower deck dining room and snorted at us a few times!!
After dinner we were escorted back to our “rooms” where we found the ‘bush babies’ (hot water bottles) the staff had kindly put in our beds for the evening.
What a spectacular day, our first in the delta! Love this remote pristine wilderness!!