Up early for our first game drive in Chobe National Park!
Met our enthusiastic safari guide, Haskins, and off we went. His first question to us was “what game do you want to see?” to which we all replied “lions!!” Within no time we were at the main Chobe NP gate, where a 4WD sporting a warning sign “Snakes in Transit” stopped next to us. Sure fire way to ensure people keep their distance!
Well, within 5 minutes of entering the park, we were on the trail of a pride of lions! Haskins notched it up a gear … he was rally driving! It was like he we were suddenly in the Dakar rally! We were holding on for dear life!! Then … the special moment … we saw the pride we were chasing – two male lions and three lionesses!!! Unbelievable … we were thrilled!! We just sat there gobsmacked at the majesty of these incredible creatures. 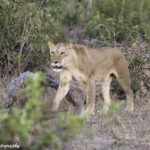 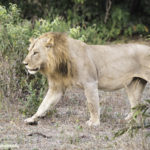 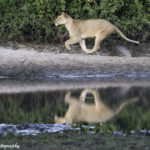 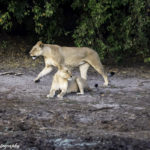 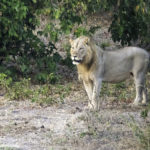 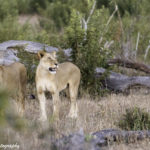 They casually set off on the track, and we were able to follow them for about half an hour. How amazing! Haskins had delivered on our special request! We continued on following the lions, and actually got ahead of them on the track we were negotiating. It was incredible to hear (and see) baboons going ballistic in the trees, alerting the surrounding wildlife to the approaching lions. The amazing early warning systems of the African bush!!Continuing on, we encountered a journey of giraffes. Yes, that’s right, “journey” is the collective noun for a group of travelling giraffes! After seeing giraffes up close and personal in the African bush I now call them the ‘catwalk models’ of the animal kingdom! They are so tall and elegant. 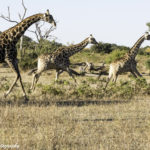 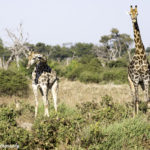 On our safari continued, and we were spoilt with many game sightings which included vultures, Cape buffalo, baboons, warthogs, kudu, impala, hippos (out of the water!), and pukus. By a sheer stroke of Iuck I managed to get a photo of a kudu mid-leap, crossing directly in front of our vehicle.
Our morning safari finished at 9:30am, after which we headed to the lodge restaurant for breakfast. We just made it in time. While enjoying breakfast we had a close encounter with a baboon who swooped in, lightning-fast, and grabbed a handful of sugar sachets from the middle of our table! Heather then organised with the Tour Desk for us to do a “local Kasane sights” tour with our fun guide, Haskins. As such a tour didn’t exist, Haskins would especially tailor something for us!! It would commence at 11:30am. Norman elected to stay at the lodge so he could work on some photos (big job!). The five of us headed off with Haskins for his personalised tour of Kasane and surrounds.
Stop 1: The Kasane Police Station where the historical Kasane Prison Baobab Postal Tree stands. The 3,000-year old tree was used as a gaol before modern prisons were built, and it also served as a place where mail was collected and disseminated throughout the Chobe region and beyond.
Stop 2: Kasane Primary School. With the local children in class, Haskins took us into the school and introduced us to the principal. She ushered us into the grade 2 classroom and introduced us to the teacher. She in turn asked the children to greet us in their best English! They all sat up pin-straight and, in beautiful harmony, said “good morning”! The teacher told us to ask the children questions and converse with them, as she wanted them to practice their English. And so we did! We asked their names, and I asked who had seen a lion, to which most of them put up their hand! The children were all so happy, with big smiles on their faces! This was a truly wonderful experience, one that money couldn’t buy!
Stop 3: Haskins’own home, where he introduced us to his sister and her baby, along with his two brothers, and even the dog! It was so lovely to meet his family, and he told us afterwards that we were the first white people ever to visit his home.
Note: En route to Haskins’home, we drove past the Mandela Pub (popular local hangout) and Haskins’church where he spends all day every Sunday (the services are day-long gatherings). He also pointed out to us a long concrete path the local government had laid for the townsfolk to more easily access the town centre. This seemingly had been a very welcome initiative. And in the next breath he casually told us that elephants freely roam through the town! Be on the lookout!
Stop 4: The Kasane Hot Springs. The warm and salty waters of this natural spring are believed to hold medicinal powers. Haskins informed us that people travel from far and wide to collect water from the hot springs which they often take back to their local churches for healing ceremonies.
Stop 5: Africa’s ‘Four Corners’, the meeting point for four countries – Botswana, Namibia, Zambia and Zimbabwe. This is also the confluence of two major rivers, the Chobe and the Zambezi. The Kazungula Ferry operates here, ferrying trucks and other vehicles between Botswana and Zambia. Well … what a hectic border crossing, with trucks lined up for kilometres on either side of the Zambezi! We were told the drivers sometimes have to wait up to two weeks to cross the river! Good news … a bridge is being built! At a cost of US $234 million, the Kazungula Bridge is under construction, with an estimated completion date of 2020. It will alleviate these transportation woes.
Haskins had a surprise for us … his tour company, Bushtracks Botswana, also had a motorised pontoon which they operated on the Zambezi. Haskins had organised for another Bushtracks Botswana guide to take us across the river to Zambia! So we hopped on board and set sail the short distance of 400 metres, then disembarked on Zambian soil! We had crossed the border and entered a fourth country on our African travels! We naturally got a cheeky photo, then quickly got back in the boat. We then travelled upstream a little so that we met up with the intersection of the Zambezi and Chobe Rivers. Haskins proceeded to tell us that this place is sacred to the African people, and that he himself felt a spiritual connection with that place in the river.
En route back to the lodge, we saw a police radar set up on a tripod. Back to the future!! We arrived back at the lodge at 1:45pm, with just enough time to eat lunch. Proceeded to tell Norman all about our “local Kasane sights” tour – he was beside himself that he hadn’t joined us.
At 3:00pm it was time for our afternoon game drive, with Haskins again. We were making a firm friend in Haskins. He was enthusiastic, fun, and, revelled in showing us the best of what was on offer in Kasane and beyond. Before we even entered the National Park, we had to stop on the main road out of Kasane to give way to a group of elephants wanting to cross. We happily obliged, appreciating the moment as ever. Then, once inside in the NP, we sighted hippos … and Norman got an even better “hippo with open mouth” shot! 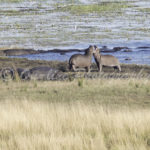 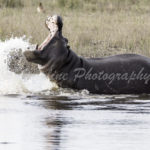 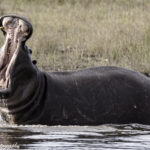 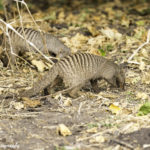 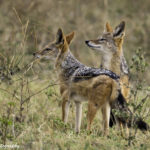 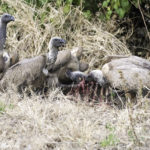 Our last sighting for the day was a pretty amazing one! After spotting a number of vultures circling in one particular spot, we made our way there to investigate. Well, there was a wake (yes, that’s the collective noun!) of vultures feeding on a fresh impala carcass! There were masses of them … in a feeding frenzy!! And while we watched on, a pack of jackals joined in.
End of safari, so we headed back to the lodge where we had pre-dinner drinks at the cocktail bar while taking in yet another exquisite African sunset. Then it was off to dinner in the restaurant.
Bedtime … after a HUGE day!